Real Skifi is a title under which a Finnish group of men have produced ski videos since late 2010. The crew is best known for its videos showcasing creative urban skiing. To this day these videos have been viewed altogether over ten million times. Take a look at the latest videos below.

After releasing "Real Skifi Episode 17" in 2017 we put the original format on a break. Since then we've produced more than a dozen videos with varying concepts and names. Now, three years later we decided it's time to bring back the old and well-rested format. Here is "Episode 18" - four and a half minutes of pure Real Skifi street skiing action.

Any hobby or passion becomes infinitely beautiful when it grows to be so valuable that the words easy and difficult lose their meaning. That's when you no longer make decisions based on the path of least resistance. That's when it doesn't matter how many times you fall or fail. That's when you exceed expectations and create something new.

New season is about to start soon. This is how ended the last one.

Last winter the folks at Valtra asked us to join them in celebrating the launch of their new G series tractors. They were curious if we could do some tricks with, over and off the tractors. They pretty much said we could do whatever we want. We said yes.

Juho converted an old VW Transporter into his dream vehicle. With skis, shovels, a drop in ramp and a winch inside it is the perfect tool for street skiing.

Among many other things coronavirus is changing the way we exercise. The situation calls for a new perspective and creative ideas. We want to encourage everyone to find their own way of exercising safely in these times. How do you stay active this spring?

Havumaki Ranch is the villa of your dreams.

Juho has been battling with knee issues for years. And he's not the only one. ACL injuries are far too common in skiing. Sometimes making a successful recovery might be taken for granted. And other times you don't even realize who didn't make it back. But what really goes on through the journey?

What if you took your powder skis to the wakeboard park?

Skiing with trampoline and hula hoop

Can Bernie jump through hula hoop? Can Ilkka slide around a trampoline?

When you're literally ready to roll but the snow just won't fall.

When you only have one handrail in your hometown.

Glimpse beyond the magic of Ep 17.

See how the Finnish summer was made!

See the secrets of Episode 14: lots of juice and cold nights.

Time to get juicy in the streets of northern Finland.

Behind the scenes of a unique ski trip to the United Kingdom.

Adventures in every skier's dream destination.

Go behind the scenes and take a closer look on the tricks and stories in Episode 13.

Deepest skiing of the season.

This video was produced for thisisfootball.com by Playground Production. The video was filmed in Geilo, Norway. Skiing by Real Skifi and few norwegian youngsters.

Softest skiing of the season.

The worst winter in years takes the crew to sunny California and back home.

The crew spent a week in Les 2 Alpes, France and participated in a freeskiing contest called Kumi Yama.

Some say skiing is a winter sport. Episode 10 shows otherwise.

The crew teamed up with Logan Imlach to produce a segment for Level 1 productions' movie Partly Cloudy.

The combined number of tries to get all the tricks done for episode 9 is most likely around one thousand. That means some difficult rails!

Coming in hot to the third season. Episode 8 includes one of the longest handrails ever slid on a pair of skis.

Spring time takes the crew to the closed slopes of a local ski hill where some legendary jibs take place. But before that the boys discuss the dangers of the sport.

First time filming outside the hometown. The not-so-remote destinations are the citys of Jamsa and Tampere.

Ilkka's purple jeans had become a major topic in public discussion. The situation demanded action. Episode 5 is a documentation of that action plus some straight forward urban skiing.

A start of a new season. This time the crew was equipped with a bungee, lights and a generator to fight against the lack of snow.

Episode 3 ended the first season of Real Skifi with a bang: some urbans, lots of sunny spring skiing in a closed resort and video game vibes.

The boys bought an old kart engine and built a little winch to speed up the second episode. Rock music and jeans were also brought in to reduce the air resistance.

This is the first Real Skifi video ever produced. No lights, no generator, no winch, no bungee, no driving licences. Just skiing in snowy Jyvaskyla.

Juho, Ilkka and Verneri spent their early and mid teen years skiing at the small local ski hill Laajavuori. They would ride the bus after school and ski there almost every day. There were no sports clubs or coaches. Instead there was a small local scene rich of excitement and thrill to learn. Occasionally the boys would participate in contests and travel to other resorts.

In late 2010 they linked up with Janne who had a camera and knew how to use it. Together they started filming urban skiing in the streets of their hometown Jyväskylä. At that point the city already had a history of urban skiing and snowboarding so it was only natural for them to follow the path. At first they had no greater plans or goals for these film shoots. Pure stoke fueled them to get out there time after time. They had no more gear than a camera and a couple shovels. However, In February 2011 the boys put together a video and the first ever episode of Real Skifi was released. The freeski world greeted the video with positive feedback and so the boys went on hungrier than ever.

During the next season Anton doubled the amount of cameras and filmers in the crew and the first sponsors stepped in. Also speed-giving devices, lights, friends, fans, trips and more helped the guys create a name for themselves. In 2013 the crew had the honor of producing a segment to Level 1's movie Partly Cloudy.

Around 2014 different universities made the crew scatter around Finland. Naturally the amount of time that the crew could spend together decreased during the following years. At the same time paid collaborations and increased time spent on planning made everything more professional. The crew was no longer just a bunch of teens making videos. They were men who had grown their hobby to a business.

All the way until 2017 most of the videos had been simply named Real Skifi Episodes and they more or less followed the familiar structure. At this point the crew decided to break the formula. They began to produce videos with different types of names and ideas or themes. Still to this day learning and experimenting with new ways to tell stories is a major part of the game. However the core of Real Skifi has always stayed the same.

Once again the crew has been and will be facing changes in 2019-2021 as each member has or will be graduated from university. All in all the crew is celebrating its 10-year-long history and still going strong.

Keeping up with the latest adventures and tasty throwbacks is easily achieved by following @realskifi on Instagram. 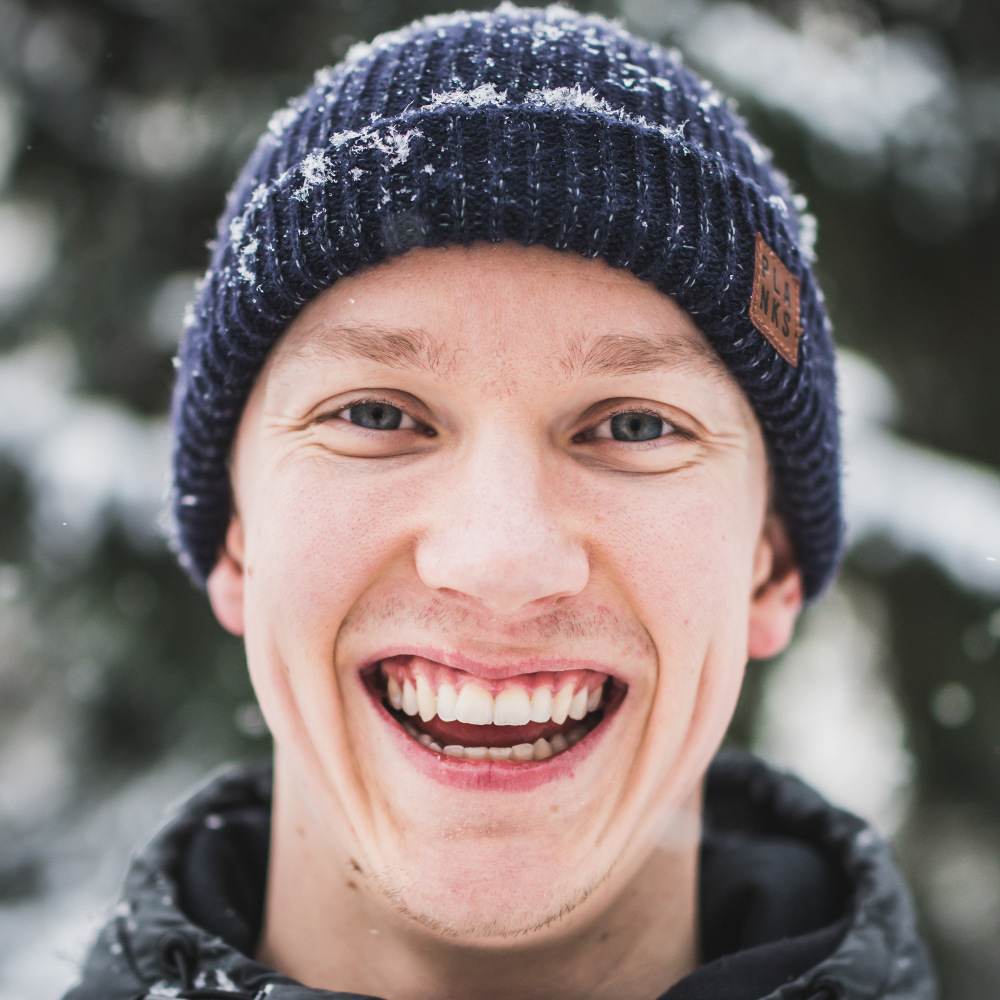 Juho is a part-time pro skier and a part-time stay-at-home dad. Traditionally Juho would just be one of the skiers but lately he has broadened his role towards directing, filming and editing too. Juho has a tendency to get excited and passionate about his hobbies and projects.

Juho's history with knee issues has pretty much changed the way he looks at skiing. It has guided him on a path of technicality and creativity. 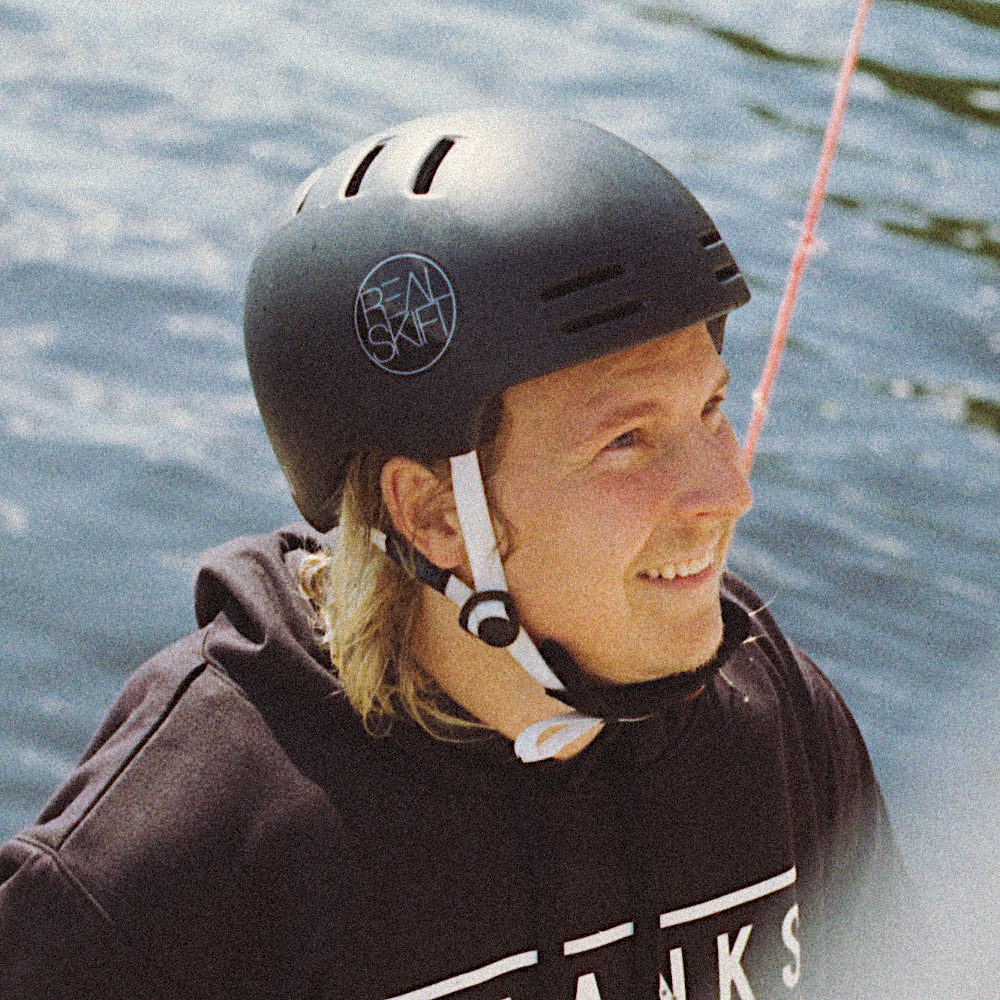 Ilkka is one the most unorthodox skiers on the planet. He can simply ski on any surface or material. If humankind had to send one man to the moon to see if you can ski there Ilkka would be the obvius choice. Him and maybe his winch operator.

During the early years of Real Skifi Ilkka would be the guy wearing those tight purple jeans. Nowadays Ilkka is a skilled surfboard builder among other things. 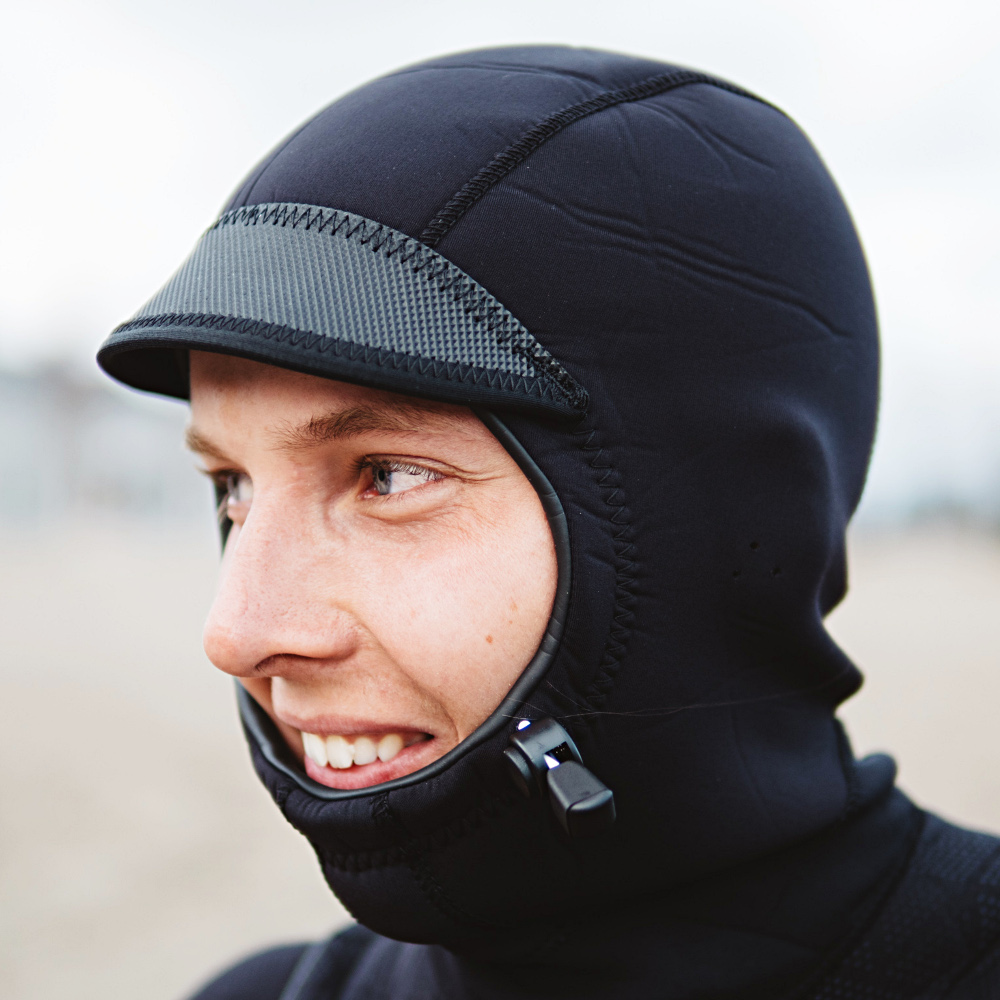 Right after Ilkka comes his couple minutes younger twin brother Verneri. He's the one you would send to a big bomb drop spot. By being small Bernie makes the spot look big and by being fearless he makes history happen. Bernie likes to go big and spin fast. Or at least he used to. Nowadays he has more or less retired from his ski career.

Probably Bernie's biggest inspiration throughout the years has always been Anastacia's song "Left Outside Alone". That song will always light a fire on him. 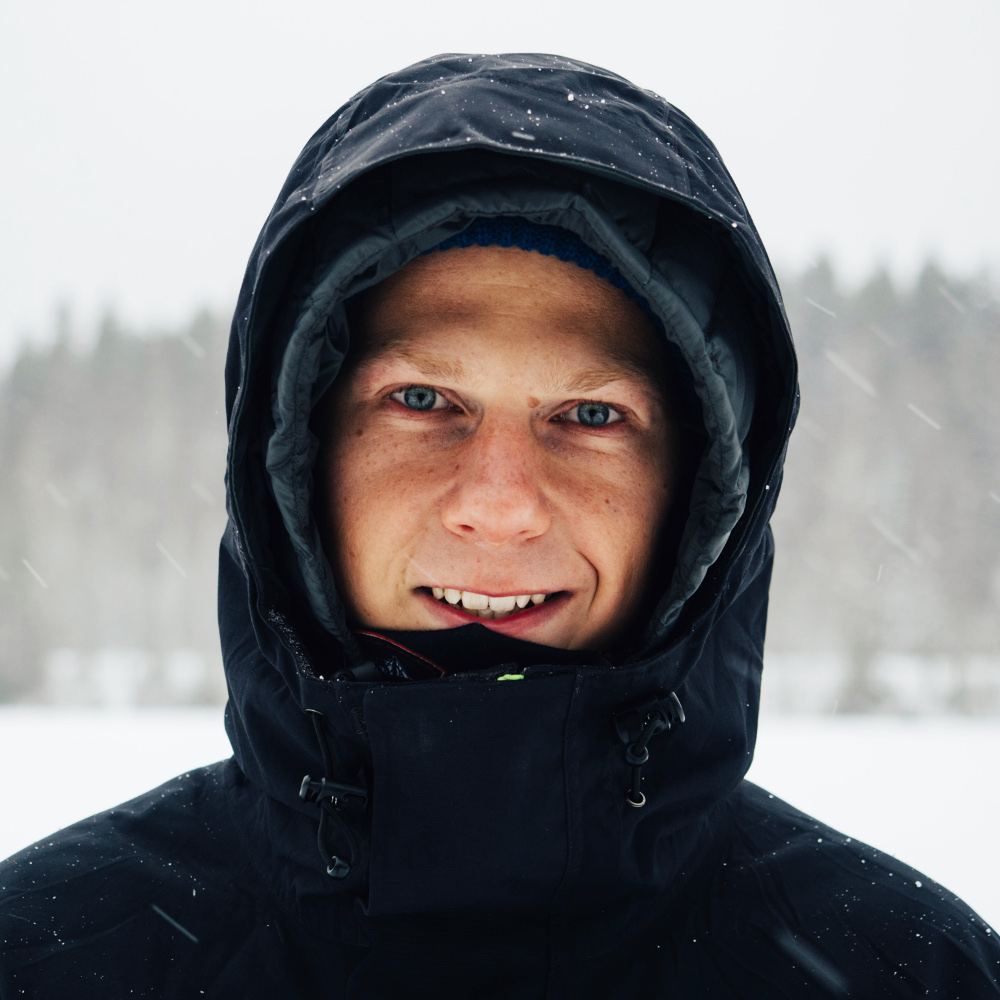 Janne is someone who sees opportunities and takes them. He has been so much more to the crew than just a filmer. Without his vision and drive Real Skifi would never have grown like it has. Behind the camera Janne is known for his glide cam maneuvers. 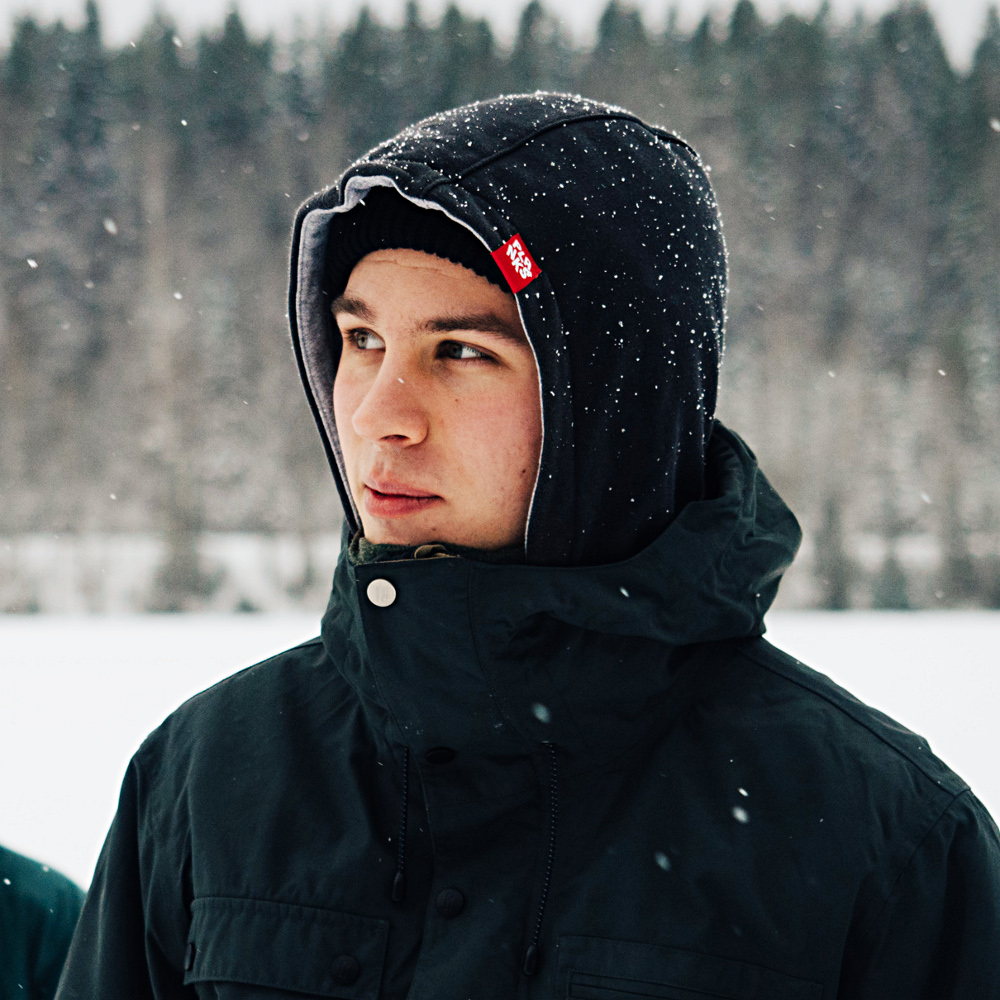 Anton is a filmmaker with a vision. He never just pushes record right away. Instead he rather takes a moment to observe, think and plan. Anton can capture some of the most phenomenal tele angles and in the editing room he always has a trick or two up his sleeve.

Anton enjoys traveling and he has a background in parkour and snowboarding. 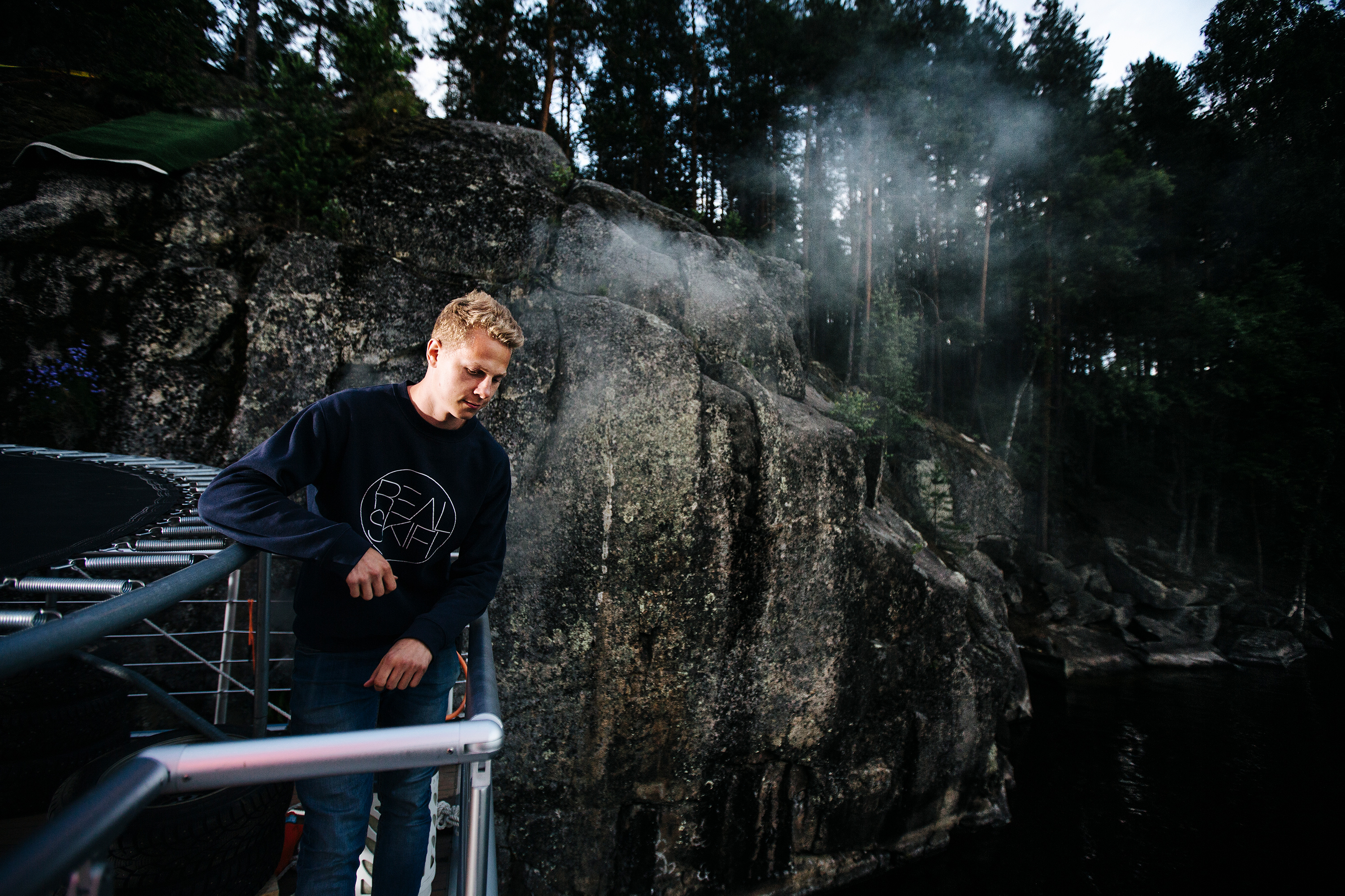 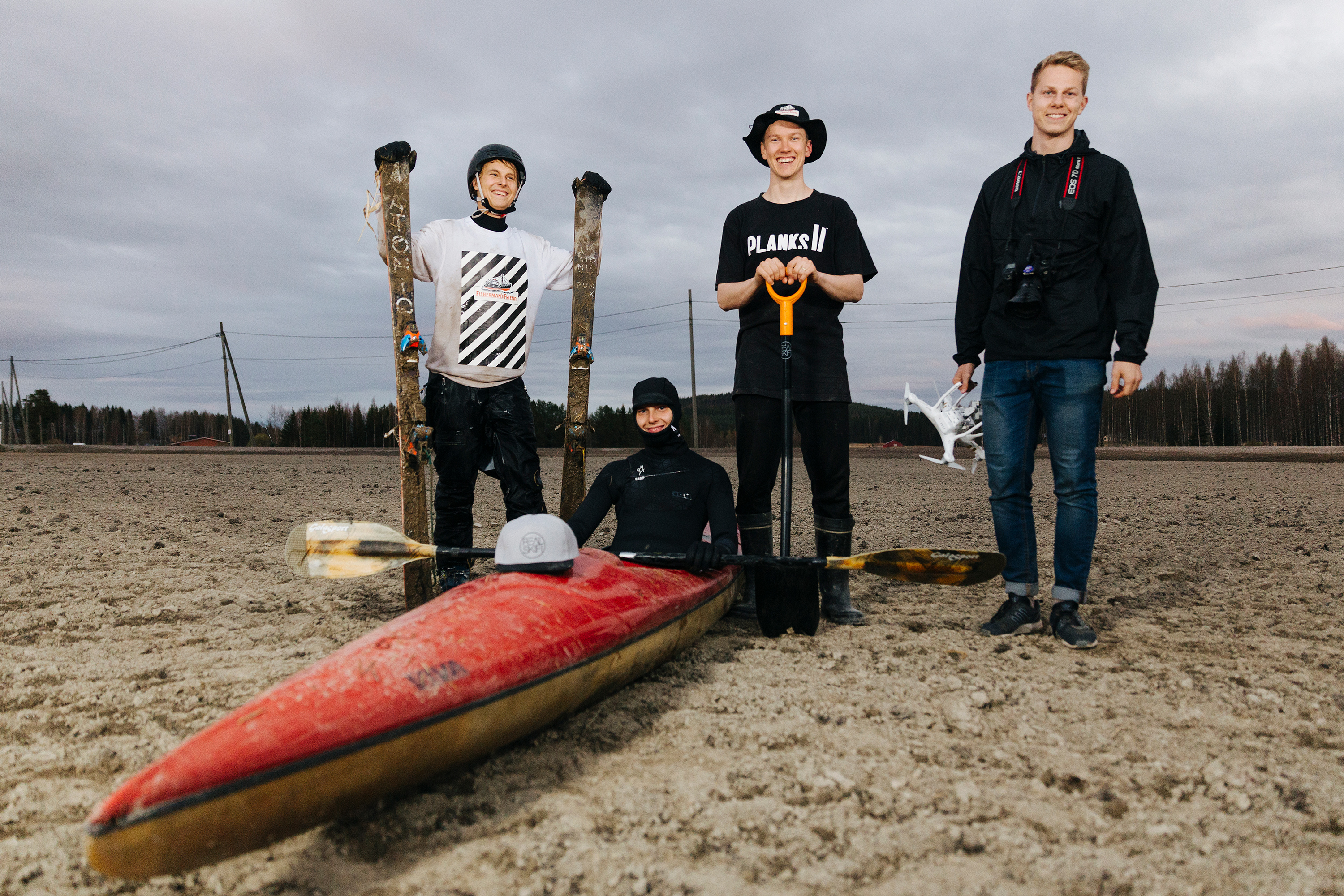 In case you have questions, proposals or inquiries of any kind feel free to write an email to realskifi@gmail.com. We will be happy to investigate your thoughts and ideas. After all skiing is a contact sport.